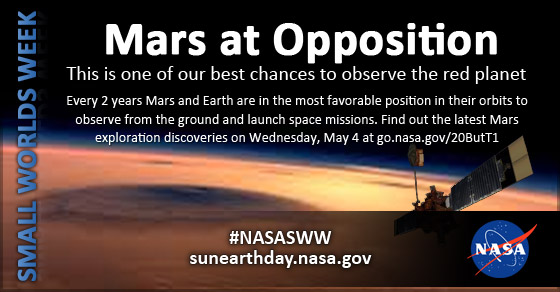 Mars, second smallest of planets, may be our best hope for finding evidence of life outside Earth. Numerous NASA flybys, orbiters, landers, and rovers have been sent to Mars to study its surface, atmosphere, magnetic field, and moons. The data gathered by both space- and Earth-based assets have yielded a vision of Mars as a planet with a violent history, which was once more hospitable. Learn about the latest Mars discoveries and prospects for life on Wednesday, May 4, 2016 at go.nasa.gov/20ButT1. Ask your questions live on Facebook on Friday, May 6, at 2-4 p.m. ET.

Dr. Gina DiBraccio is currently a NASA Postdoctoral Program Fellow in the Solar System Exploration Division at NASA's Goddard Space Flight Center. Her research focuses on the Sun's interaction with planets and their magnetic fields. As a science team member of NASA's MAVEN mission at Mars, she is actively researching atmospheric escape at Mars in order to understand the planet's climate evolution. Her role on MAVEN's Magnetometer team includes supporting the careful calibration and processing of magnetic field data for scientific analysis. Dr. DiBraccio is also a member of NASA's MESSENGER mission science team where she has explored space plasma physics at Mercury.

Outside of her work and research, Dr. DiBraccio enjoys being active by playing volleyball, running in half marathons, and coaching classes at solidcore. Additionally, she loves to travel the world, learning about new countries and their cultures.

Dr. Christopher P. McKay is a planetary scientist with the NASA Ames Research Center who studies the evolution of the solar system and the origin of life (aka astrobiology). He is also actively involved in planning for future Mars missions including human settlements. That takes him to the Antarctic dry valleys, Siberia, the Canadian Arctic, and the Atacama Desert to study life in these Mars-like environments.

Dr. Mckay's research on planetary atmospheres included Titan and Mars. He is a co-investigator on the Huygens probe, the Mars Phoenix lander, and the Mars Science Laboratory.

As an undergraduate Dr. Mckay studied physics and mechanical engineering. He thinks that was a good choice, providing him a good foundation for all the broad research approaches needed for his current research.

Dr. Glyn A. Collinson is a space scientist/explorer and a contractor at NASA's Goddard Space Flight Center. He works with spacecraft instruments to study the space environment around Mercury, Venus, Earth, Mars, and Saturn. Among the many tasks he performs, he is a team member of NASA's MAVEN mission to Mars, searching for the electric field at Mars thought to be responsible for Earth's polar wind. In his spare time, he writes songs and plays the Irish Bouzouki.

A typical galaxy like the Milky Way has a magnetic field strength of about 0.000003 Gauss.