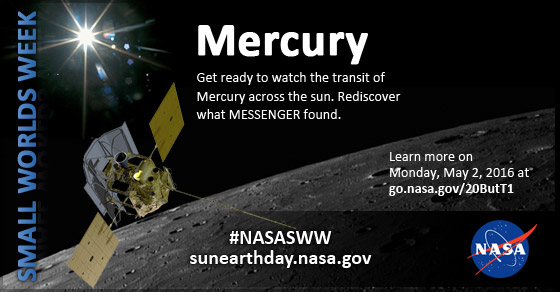 Only slightly larger than Earth's moon, Mercury is the smallest planet, even smaller than Jupiter's moon, Ganymede, and Saturn's moon, Titan. Despite its size, Mercury still holds big secrets for astronomers. Surprisingly, recent observations show the presence of water ice in shaded polar craters as well as a tenuous but present atmosphere. Chief among its mysteries is the origin of its global magnetic field; it's the only other terrestrial planet, besides Earth, to have one. Learn more about the latest discoveries from spacecraft and ground-based observations of Mercury at go.nasa.gov/20ButT1 on Monday, May 2, 2016. We are also answering questions on Facebook on Friday, May 6, at 1-4 p.m. ET.

Dr. Nancy L. Chabot is a planetary scientist at the Johns Hopkins University Applied Physics Laboratory (APL). She received an undergraduate degree in physics at Rice University and a PhD in planetary science at the University of Arizona. Her research interests involve understanding the evolution of rocky planetary bodies in the Solar System. Prior to joining APL, Dr. Chabot worked at NASA Johnson Space Center and Case Western Reserve University. She has been a member of five field teams with the Antarctic Search for Meteorites (ANSMET) program and served as the Instrument Scientist for the Mercury Dual Imaging System (MDIS) on the MESSENGER mission. Dr. Chabot is currently the chair of NASA's Small Bodies Assessment Group (SBAG). Asteroid 6899 Nancy Chabot is named in her honor.

In her free time, Nancy enjoys being outdoors, traveling, and sports.

Dr. Rosemary Killen is a planetary scientist at NASA's Goddard Space Flight Center, specializing in studies of the exospheres of Mercury and the Moon. She received an undergraduate degree in Mathematics and Physics from Southwestern University, and a PhD in Space Physics and Astronomy from Rice University.

Dr. Killen has observed Mercury, the Moon and the Galilean satellites at the McMath-Pierce solar telescope, the W.M. Keck Telescope, the Infrared Telescope Facility in Hawaii and at the Anglo-Australian Observatory. She has modeled the exospheres of Mercury and the Moon, and performed radiative transfer calculations for optically thick atmospheres. She is interested in the physics of space weathering and the interactions of the solar wind plasma with the surfaces of planets and satellites. As a member of the Planetary Systems and Bioastronomy Division of the International Astronomical Union, Dr. Killen observed the transit of Mercury in 2006 and is planning to do so again in 2016.

The most powerful aurora can generate over 1 trillion watts of power.