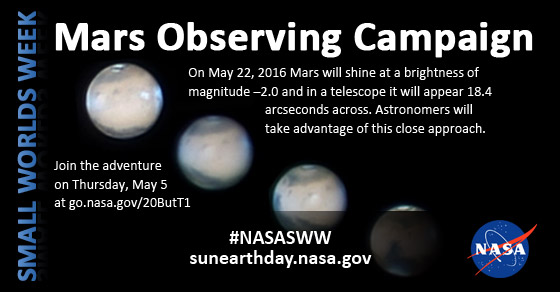 During the weeks immediately preceding and following the May 22, 2016 Mars opposition, professional and amateur astronomers from around the world will point their telescopes skyward to get the best images in over two years of the red planet. Join your fellow amateurs in exploring the technologies and techniques for observing Mars and taking knockout images. Learn more on Thursday, May 5, 2016 at go.nasa.gov/20ButT1. Ask your questions live on Facebook on Friday, May 6 at 3-4 p.m. ET.

The Opposition of Mars

Dr. Aaron Clevenson has been doing astronomy for almost 45 years. He is an astronomy professor at Lone Star College in Montgomery and the Observatory Director for the Insperity Observatory in Humble Independent School District of Texas. In his spare time he chairs the Astronomy Day in the Greater Houston area, and serves as the National Astronomical League Observing Program Director. Don't miss the opportunity to chat with an Astronomical League master observer with a Gold Award!

Lou Mayo is a planetary scientist and program manager working for ADNET Systems at NASA's Goddard Space Flight Center, and a professor of astronomy at Marymount University. He has over 25 years experience supporting NASA space and Earth science missions and data systems, including 11 years managing the Voyager IRIS and Cassini CIRS instrument teams for private industry. He has published a number of papers on the atmosphere of Titan focusing on modeling atmospheric aerosols and condensates.

Lou is a member of the DC Space Grant Consortium and the American Astronomical Society/Division for Planetary Sciences education committee. He is a frequent author and speaker on topics in astronomy and space physics and was a columnist for Mercury Magazine for three years. Lou runs an international network of after school astronomy clubs and is active in developing nationwide space science education programs for NASA. When he is not traveling, he plays basketball on a regular basis.

The strongest magnetic field in nature is from the magnetar star SGR 1806-20, which has been estimated as 800 trillion Gauss.