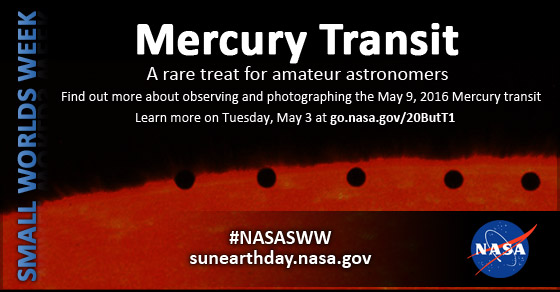 Planetary transits are quite rare. Mercury will transit in front of the sun only 14 times this century! Tiny Mercury, subtending only 12" in size, will cross the sun as seen from Earth on May 9, 2016. Observers in North and South America as well as most of Europe, Asia, and Africa will see all or part of the transit. The transit itself will occur over a 71/2 hour period beginning at 7:12 ET (or 11:12 UT, 1st contact). Visit go.nasa.gov/20ButT1 on Tuesday, May 3, and join us on Facebook on Friday, May 6, as we talk to amateur astronomers about how to observe this rare celestial event.

Mercury Transit in 2006 from SOHO/MDI

ScienceCasts: The 2016 Transit of Mercury

Animation of the May 9, 2016 transit of Mercury

Dr. Sabrina Savage, a research astrophysicist at NASA's Marshall Space Flight Center in Huntsville, Ala., is the project scientist for Hinode, a joint U.S.-Japanese mission to study the sun.

Dr. Savage specializes in the sun and solar activity. While helping to lead the Hinode team, she also continues her research into solar coronal flows and participates in missions to develop new solar monitoring instrumentation. Her goal is to understand how turbulent solar processes lead to explosions such as solar flares and coronal mass ejections, affecting extreme space weather.

Dr. Savage loves rockets and the outdoors, and would prefer a mountaintop or a trout stream to a beach any day.

Dr. Aaron Clevenson has been doing astronomy for almost 45 years. He is an astronomy professor at Lone Star College in Montgomery and the Observatory Director for the Insperity Observatory in Humble Independent School District of Texas. In his spare time he chairs the Astronomy Day in the Greater Houston area, and serves as the National Astronomical League Observing Program Director. Don't miss the opportunity to chat with an Astronomical League master observer with a Gold Award!

Lou Mayo is a planetary scientist and program manager working for ADNET Systems at NASA's Goddard Space Flight Center, and a professor of astronomy at Marymount University. He has over 25 years experience supporting NASA space and Earth science missions and data systems, including 11 years managing the Voyager IRIS and Cassini CIRS instrument teams for private industry. He has published a number of papers on the atmosphere of Titan focusing on modeling atmospheric aerosols and condensates.

Lou is a member of the DC Space Grant Consortium and the American Astronomical Society/Division for Planetary Sciences education committee. He is a frequent author and speaker on topics in astronomy and space physics and was a columnist for Mercury Magazine for three years. Lou runs an international network of after school astronomy clubs and is active in developing nationwide space science education programs for NASA. When he is not traveling, he plays basketball on a regular basis.

Magnetic pole 'reversals' have no effect on the rotational poles of a star or planet.