2012 is turning out to be a landmark year for celestial events! Besides the usual meteor showers, space station flyovers, and Iridium flares, there will be a... 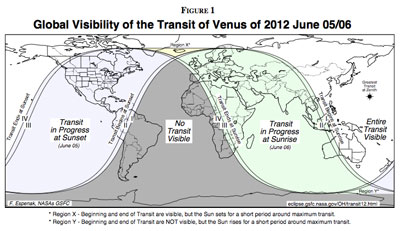 By far, the most rare and historically important of these is the Transit of Venus. For the June 5/6, 2012 transit of Venus, NASA through their Science Mission Directorate would like to invite Amateur Astronomers to participate in education programs designed to inform the public about this wondrous and historic event and to provide observations of the transit to replicate the historic efforts to derive the AU. For this, NASA has entered into partnership with the Astronomical League, the Astronomical Society of the Pacific, and many other groups to provide and support education events all over the country, and internationally, including schools, museums and planetariums, sun parties, and community and civic association events.

In addition, NASA is co-sponsoring an observing certificate program with the Astronomical League. Amateur Astronomers who would like to participate in providing images and timings of the transit will get a NASA Certificate of Appreciation and will have their observations, appropriately credited, posted on the NASA Sun Earth Day 2012 web site. We will also provide the necessary tools to derive the A.U., given observed displacements in the apparent position of Venus on the sun (parallax). Please join us in telling this amazing story of discovery to the world. We would also like to display your eclipse and occultation astro photos as well as any pictures of special activities (e.g. star parties, etc.) held around these celestial events.

So, where will you be on June 5/6, 2012? If you don't know yet, you had better decide quickly or you may miss one of the rarest events in astronomy. To learn more about this rare celestial event, read this fascinating article, "The Transit of Venus: Twice in a Lifetime".

And remember to: Keep Looking Up!*

* With acknowledgement and thanks to Star Hustler / Star Gazer, Jack Horkheimer (1938 - 2010), who hosted the world's first and only weekly TV series on naked-eye astronomy for over 30 years and 1,708 episodes, since it first aired in 1976. Jack passed away August 20th at the age of 72. He would always begin his shows with "Greetings, greetings fellow star gazers" and would always end them with his now famous words of encouragement to "keep looking up!". 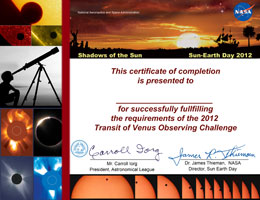 During intense solar flares, astronauts see bright flashing streaks of light as a result of high-energy particles zipping through their eyeballs.