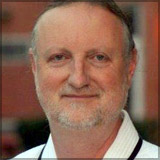 The Mayan Calendar and the 2012 Hoax

By now, there probably aren't many people who haven't heard that the Mayan Calendar predicts the world (as we know it) will come to an end through a series of global catastrophes on December 23, 2012*. The internet is filled with websites supporting this thinking. In fact, a Google web search on "2012 Prophesy" returns over 1.5 million results and a search on "2012 apocalypse" returns 2.6 million! Now, here's something truly scary, type in "2012 suicide" and you get over 3.6 million results. Type in 2012 mass suicide and you get 170,000 results. Of course they aren't all related to the 2012 Mayan Prophesy (e.g. New Zealand Suicide prevention Action Plan 2008-2012) but most are. Yes, there are people planning to commit suicide and some who are even planning to kill their whole family to avoid what they believe is the coming apocalypse and end of the Earth. Here are some representative quotes I culled from internet chat rooms...

"I already broke up with my boyfriend, cash all my bonds and whatnot and plan on dropping out of school at the end of the year and totally living it up for 2011 since that's our last year on earth. My mom caught wind of this and has been yelling at me non stop. I'm doing it anyway but she did put a thought in my head that the Mayans could be wrong." (ref: Answers.yahoo.com)

"I've had two teenagers who were considering killing themselves, because they didn't want to be around when the world ends," he said. "Two women in the last two weeks said they were contemplating killing their children and themselves so they wouldn't have to suffer through the end of the world." (ref: Huffingtonpost.com)

By the way, it appears that World Suicide prevention Day is September 10 every year...just in case.

So, what's all the fuss about? Should we max out our credit cards and live literally like there is no tomorrow? Should we give credence to these Mayan prophesies? To find the answers, we need to understand Mayan science, Mayan mathematics, and perhaps a little about human psychology.

Mayan civilization spanned a period of about 3,000 years from 1,800 BCE (earliest records) to around 950 AD. During this time, the Mayans developed keen skills in astronomy, mathematics, time keeping, agriculture and many other disciplines. They observed the sky and made careful and accurate observations of the movements of celestial bodies and recorded their observations in a series of manuscripts or books called codices. Through detailed observations of the sun and celestial sphere, the Mayans understood the length of a year to within 1/1,000 of a day. They designed temples (Pyramid of Kukulkan, Chichenitza Mexico) to honor the yearly motion of the sun across the horizon. The pyramid has four sides, each with 91 steps leading up to a special room, one step above the rest. (91 x 4) + 1 = 365. They observed and worshiped the planet Venus and knew about its 584 day synodic period with the Earth as well as its 8-5 resonance with Earth's orbital period coming back into alignment with the Earth, sun, and stars every 5 synodic periods or 2,920 days . The Mayans displayed the full 584 day synodic cycle of Venus in the Dresden codex. Clearly, the Mayans were accomplished astronomers and time keepers.

The Mayans were great astronomers and studied the movement of the heavens. They paid special attention to the movements of the sun, moon, Venus, and the other known planets (Mercury, Mars, Jupiter, and Saturn) and predicted eclipses, equinoxes, and solstices. Their astronomical observations were recorded in hieroglyphs on fig tree bark, in almanacs or codices. When the Spaniards invaded the Americas, they destroyed most of these codices, probably in an attempt to wipe out the Mayan culture and convert them to Christianity. However there are four codices known to have survived: Dresden, Madrid, Paris, and Grolier - named after the locations that they surfaced some years later. The Dresden Codex is believed to be the most complete of the four. It contains many very accurate astronomical tables showing the movements of celestial bodies such as the moon and Venus. It also contains 52 almanacs based on the 260 day Tzolkin religious calendar, making predictions about rain fall and floods and giving advice on when to plant and harvest. And, it contains information on medicines, disease, occupations, marriage, commerce, child birth, and worship schedules (ref: Barnhart, 2005).

Besides all of the more practical information it contained, the Dresden codex was also a religious text for the Mayans, referencing astrology and prophesies. Images of Gods and Goddesses grace the pages including Goddess "I" and "O"; the Moon Goddess, and sun God (K'inich Ahaw) among others. It contained calendars showing important celestial events and referenced the end of the 13th Baktun period which is the largest period of time formally addressed by the Mayans. As we shall see, after 13 Baktun periods, the Mayan calendar returns to zero and begins again. However, there is no mention of a dooms day or apocalypse in the codex or in any Mayan writings. Their calendar simply resets to zero very much like our own calendar resetting on January 1, 2000. 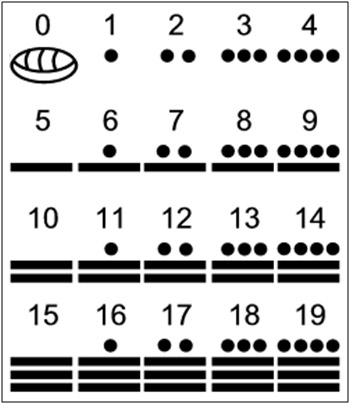 The Mayans had a sophisticated system of counting and mathematics. Instead of a base 10 system as we have, the Mayans used a base 20 system of numbers. The Mayan numbers from 0-20 are seen at right. So, many of their important calendar periods increment in multiples of 20 (e.g. 20 tuns = 1 katun). This factor of 20 is integral in determining the number of days it takes for their calendar to turn over (back to zero).

The Mayans used four calendars to track time: The Tzolkin, Haab, Calendar Round, and Long Count.

The Tzolkin (13x20 or 260 days) and Haab (365 days) systems aligned every 52 years. This is because the smallest number (least common multiple) that both 260 and 365 can be divided into evenly is 18,980 or 365x52. This was greater than an average person's life expectancy. The cycle then repeated itself every 52 Haab years which is known as the "Calendar Round". The end of each Calendar Round was viewed as bad luck. The Mayan's believed that the gods granted them this time and so the end of a Calendar Round was a time of anxiety as they waited to see if the gods would grant them another cycle (which they always did!).

Similar to our Julian calendar, the Long Count is simply a count of days since a particular starting point. That point is believed to be August 11, 3114 BC.

The Mayans used a base 20 counting system and kept time in units of 20 days, called a uinal. So:

Some have tried to tie the date to the winter solstice (December 21, 2012). This appears to be only a coincidence and the correct date for the end of the 13th Baktun in the Mayan Calendar is probably December 23, 2012. Never the less, the Mayans have words for lengths of time greater than 13 Baktuns and we have no record of them ever predicting the end of the world.

The list of unfulfilled doomsday predictions throughout history is enormous and, of course, as would seem obvious, none of them have come true. I was impressed with the large volume of Judeo-Christian doomsday predictions of the Armageddon, Judgment Day, the Anti-Christ, or the Second Coming of Jesus, from Pat Robertson's guarantee that the world would end by 1982 to Joseph Smith (founder of the Mormon church) telling his flock that he had spoken to God personally and was assured Jesus would return and the end times would begin by 1891. One of my favorite (if you can say that) doomsday stories involves the Heaven's Gate Cult in 1997. They believed that an alien spaceship was following comet Hale-Bopp and that NASA was covering up the evidence. Somehow, from that, they concluded that the world was coming to an end soon so they committed mass suicide so that their souls could board the alien ship and evolve to some "next level". They even purchased alien abduction insurance at a cost of $10,000 (OK, at least that was a smart move). Apparently, they used planetarium software to prove that the alien ship was real since they could observe it visually but could not find it on the online star chart. Sadly, they had set the limiting magnitude of stars that were to be displayed too low and so the star did not appear on the chart. You can find your own stories of failed apocalypse predictions. There are many web sites that offer such accounts such as "A Brief History of the Apocalypse" (http://www.abhota.info).

So what's going on? There appears to be some psychological basis for our fascination with doomsday predictions. These predictions often set "believers" above and apart from the mainstream population and provide a rallying point that strengthens group affiliation as is the case with many religious prophesies. Even when these prophesies fail to produce, there is evidence that these groups often actually strengthen their beliefs in the prophesy, modifying it just enough to be once again believable. I am also reminded of the people who get excited about natural disasters (tornados, tsunamis, hurricanes, etc.), choosing to stay in the targeted areas rather than evacuate, going so far as to surf in hurricane driven swells. This type of experience is perhaps echoed in other areas of our lives where we explore our thanatos (ref: Freud, Death Instinct) through pro football, bungee jumping, sky diving, and roller coasters.

There are, however, at least two important (real) astronomical reasons to take note of the year 2012. The first is the Transit of Venus. This is a rare alignment of the planet Venus with the sun and Earth which occurs twice - eight years apart - every 105.5 - 121.5 years. The second alignment of this pair will occur on June 5-6th, 2012. Since the 1600's, apparitions of the transit of Venus have been used to derive the distance to the sun (the A.U. or Astronomical Unit), so it was of great importance to astronomers of the time. Don't miss this one. The next Venus Transit won't occur until 2117!

The other is a total solar eclipse which will graze the northern coast of Northern Territory and Queensland Australia on November 13th. The path of totality runs almost precisely through Cairns before heading out into the Pacific Ocean. Also, on May 20th, there will be an annual solar eclipse visible in southern China, Japan, and the Western US.

So, there is a lot to look forward to in 2012 but I don't think the apocalypse is going to be one of them!

A refrigerator magnet has a strength of 100 Gauss.